2018 Transition to District Based Elections 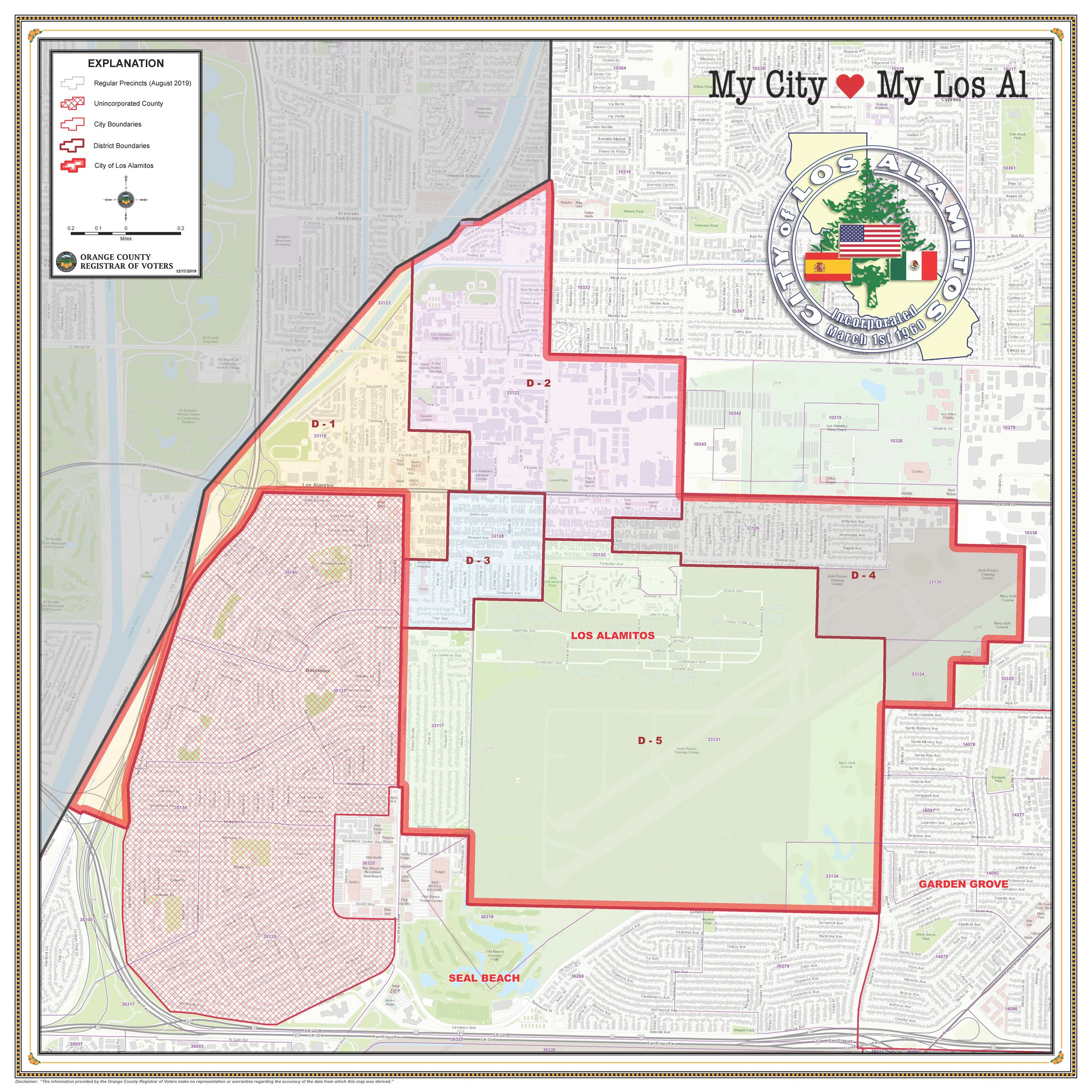 Beginning in 2020, residents in the City of Los Alamitos will vote for candidates who run in the district in which they live. Once elected, these City Council Members will provide direct representation of the unique population, issues and challenges found within each of the districts. The Council shall elect one of its members to act as Mayor as outlined in the City's Charter.

On July 30, 2018, following five public hearings related to the creation of geographic voting districts and the drawing of district boundaries, the Los Alamitos City Council approved the Green District Map (PDF). The City Council adopted Ordinance Number 2018-05 establishing a district-based election system inclusive of the Council's preferred district map and sequence of by-district elections. Council selected its preferred sequencing of Districts 1 and 3 in 2020 and Districts 2, 4, and 5 in 2022. These changes will be in effect for the November 2020 General Municipal Election.

The districting process is complete; the following information is preserved for archive purposes.

The City of Los Alamitos is working to comply with the California Voting Rights Act of 2001. Beginning with the November 2020 elections, Los Alamitos voters will start to elect members of the City Council from geographically defined districts, rather than through a citywide at-large voting process. The City is seeking input from the community to help draw the future council districts in Los Alamitos.

The results of this input process would be the creation of a number of distinct voting districts. Candidates living within each of the different districts would then run for election, and residents will vote for a candidate within their district. This will allow for each district to have representation on the City Council, providing a representative advocating for each district within the City.

This page will provide access to all things related to the district based elections mapping process including, but not limited to, notices of all public meetings, public notices, press release, agenda reports, maps and supporting documents. Should you have any questions, please contact the City Clerk's Office at 562-431-3538, ext. 220 or via email.

Why There Is Proposal to Change the Voting Process
The City currently utilizes an at-large election system where voters citywide select each of the five City Council Members. By contrast, a district-based election system is one in which a city is physically divided into separate districts, each with one council member who resides in the district and is chosen solely by the voters residing in that district.

The City received a certified letter on March 29, 2018, from Kevin Shenkman, an attorney with the law firm of Shenkman and Hughes in Malibu, CA. The letter asserts that the City's at-large election system violates the California Voting Rights Act by diluting the ability of Latinos to elect candidates of their choice or otherwise influence the outcome of Los Alamitos' City Council elections. Mr. Shenkman claims "polarized voting" may be occurring and threatens litigation if the City declines to voluntarily convert to district-based elections. The California Voting Rights Act ("CVRA"), codified as Elections Code sections 14025 et seq. became law on January 1, 2003.

The purpose of the CVRA is to prevent the disenfranchisement of protected classes; which are broadly defined to include members of a race, color, or language minority group. Any voter who resides in a city and is a member of a protected class may file a lawsuit against the city for a violation of the CVRA. To succeed, the plaintiff must only show that, as a result of an at-large election, "racially polarized voting" has occurred. "Racially polarized voting" means there is a difference between the choice of candidates preferred by voters in a protected class and candidates preferred by voters in the remainder of the voting population.

Timeline for This Change
The districting process timeline is prescribed by the California Elections Code, Section 10010. The City had a 45 day period from the receipt of the certified letter to consider if it desired to transition to election by districts and to adopt a resolution indicating so. Once the City Council adopted a resolution indicating its intent to transition to districts, the City had 90 days to do so. In order to stay within the State's safe harbor protections and avoid potentially costly legal exposure in the event of a California Voting Rights Act challenge, the process had to be completed within a 90-day window.

As with any issue before the City Council, you can attend a forum, testify at a hearing, and/or encourage the Council to vote yes or no on any part of this process by simply coming to any of the public meetings on this topic.

The City Clerk is available to answer any questions you have about the process; the schedule; the draft plans; or how to draw your own plan. You can reach the City Clerk using the contact information provided.

You do not have to wait for a meeting to weigh in: you can call, email or write to the Council with your thoughts at any time:
Windmera Quintanar, MMC
City Clerk
3191 Katella Avenue
Los Alamitos, CA 90720
Phone: 562-431-3538, ext. 220
Email Windmera Quintanar

Draw Your Own Map

Districting is an unusual issue: instead of simply urging the Council to vote yes or no on a given map, with Districting you can take the next step and draw and submit your own preferred map for the Council to consider. Every map received, in any format, will be processed by the City's demographic consultant complete with professional map and full demographic analysis. All legal maps will be presented to the Council for its consideration. Legal compliance with State and federally mandated criteria includes:

Please submit all maps to the City Clerk's Office. You may submit in person or via email. Please make sure to include your contact information so our demographic consultant can contact you with any questions. For your reference, you can download the Zoning Map (PDF).

All meetings will be held in the Council Chamber located at:
3191 Katella Avenue
Los Alamitos, CA 90720

For each following draft plan listed, there are links to PDF format maps and a link to an interactive maps that allow you to zoom in and out to see plan details.

Scheduled to be adopted at an adjourned regular meeting on July 30, 2018 at 6 pm:

The following maps were presented to the City Council for consideration at its Fourth Public Hearing on July 9, 2018 at 6 pm:

The maps listed below (proposed election sequence updated June 14, 2018) were presented to the City Council for consideration at the Third Public Hearing held on June 18, 2018 at 5 pm:

These maps were submitted by members of the community. While they do not meet population-balancing requirements, they still provide important feedback on communities of interest and can help guide discussion toward the development of a final district map for Los Alamitos.