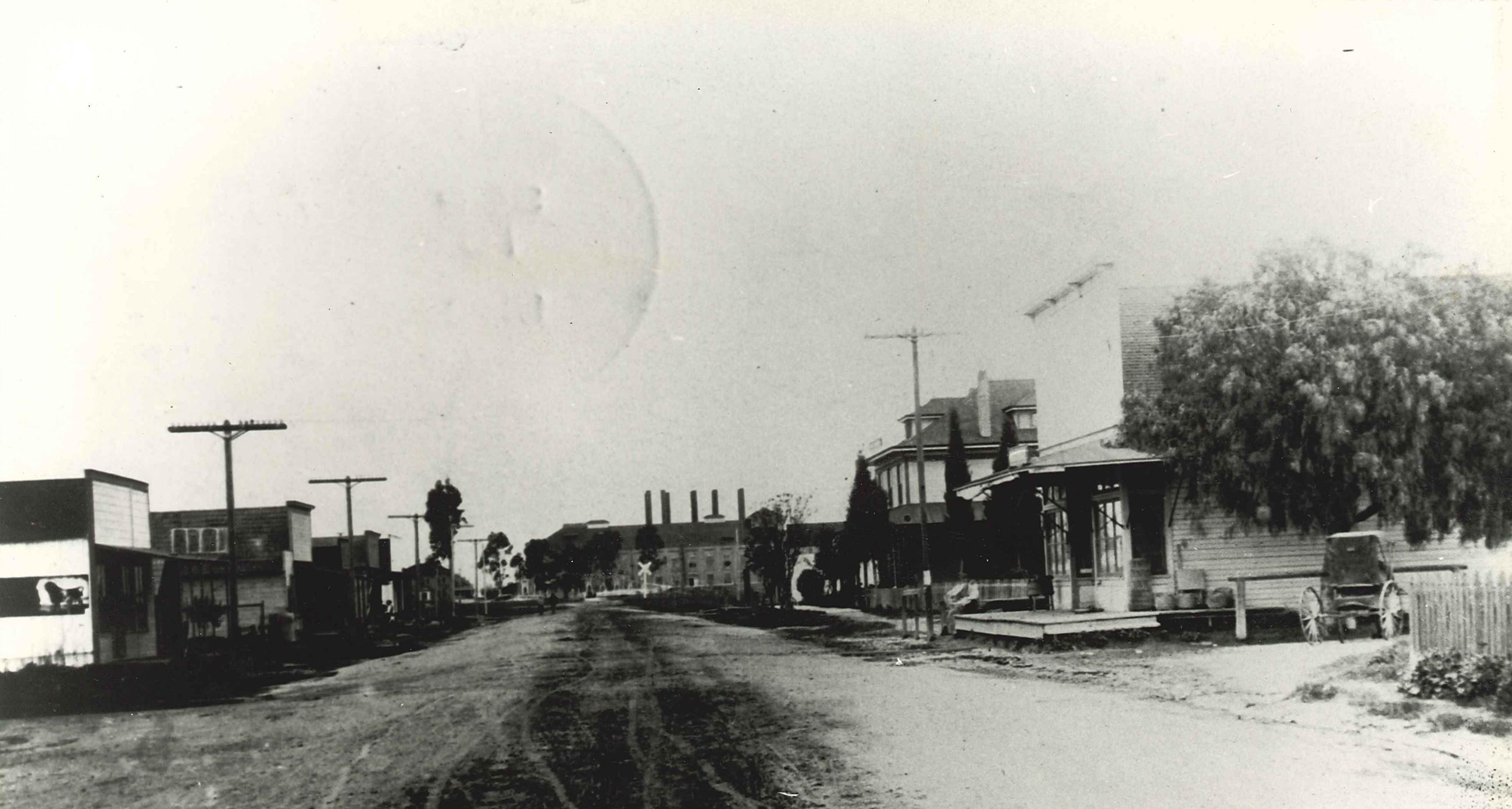 The Puvu Indians, a branch of the Shoshones, lived in what is now the Southern California basin. There are indications they had lived here 3,000 years or more. When the expedition of Spaniards, led by Gaspar De Portola, arrived to explore and colonize Upper California in 1769, they found the land marked by many Indian villages, or “rancherias,” containing from 500 to 1500 huts, in the area which later became Los Angeles and Orange Counties.

The Portola expedition consisted of colonists to settle in selected pueblos or towns; missionaries to convert the natives and prepare them to become “civilized” enough to assume control of the land which the missions held in trust for the Indians; and, soldiers to establish military strong points or “presidios” to protect both groups, as well as to keep foreign interests such as Russia or England from invading lands claimed by Spain.

The noble intention of holding the land in trust for the Indians ended in 1784 when Governor Fages, an original member of the expedition, made vast grants of lands to two of his former soldier companions. These were Sergeants Dominguez and Nieto. The Nieto Grant consisted of all the lands lying between the Santa Ana and San Gabriel Rivers, extending from the ocean to the foothills of the San Gabriel Mountains. This huge mass is now occupied by most of the cities in Los Angeles County and northern Orange County.

Upon the death of Don Manuel Nieto, the Grant was divided into five large ranchos and divided among his children. The two ranchos most familiar to us are Los Cerritos (The Little Hills), located in northwest Long Beach next to the Virginia Country Club, and Los Alamitos (The Little Cottonwoods), with its ranch house atop the hill at the south end of Palo Verde Avenue, also in Long Beach.

Los Alamitos contained six square leagues, or 85,000 acres of range land. Granted to son Juan Jose Nieto, he soon sold the property to then Governor Figueroa for $500. Upon the death of the governor, the land was bought by Abel Stearns in 1842 for $5,934. The price included the land and all the cattle grazing upon it. He successfully raised cattle until the extended drought of 1863-64 killed more than 30,000 head of stock, and he lost the rancho through foreclosure to Michael Reese, a money lender in San Francisco.

Reese let the land lie fallow until 1878, when John Bixby leased the rancho to raise grain and sheep. In 1881 I.W. Hellman and the J. Bixby Company joined together in buying the Los Alamitos Rancho which by then had been reduced to 28,087 acres from the sale of parcels through the years. Five thousand acres were set aside for a township to be established in the near future. It was a township which developed after John Bixby had died.

In 1896, ex-Senator William Clark of Montana purchased 8,139 acres of rancho land for raising sugar beets. He planned the township of Los Alamitos, building the first sugar refinery in Southern California here.  He also constructed housing and recreation buildings for workers, and guaranteed to buy all the sugar beets that could be raised in the surrounding 70 square miles of territory during the next five years. Most of the land between what is now Lakewood and the Santa Ana River became one vast field of sugar beets. 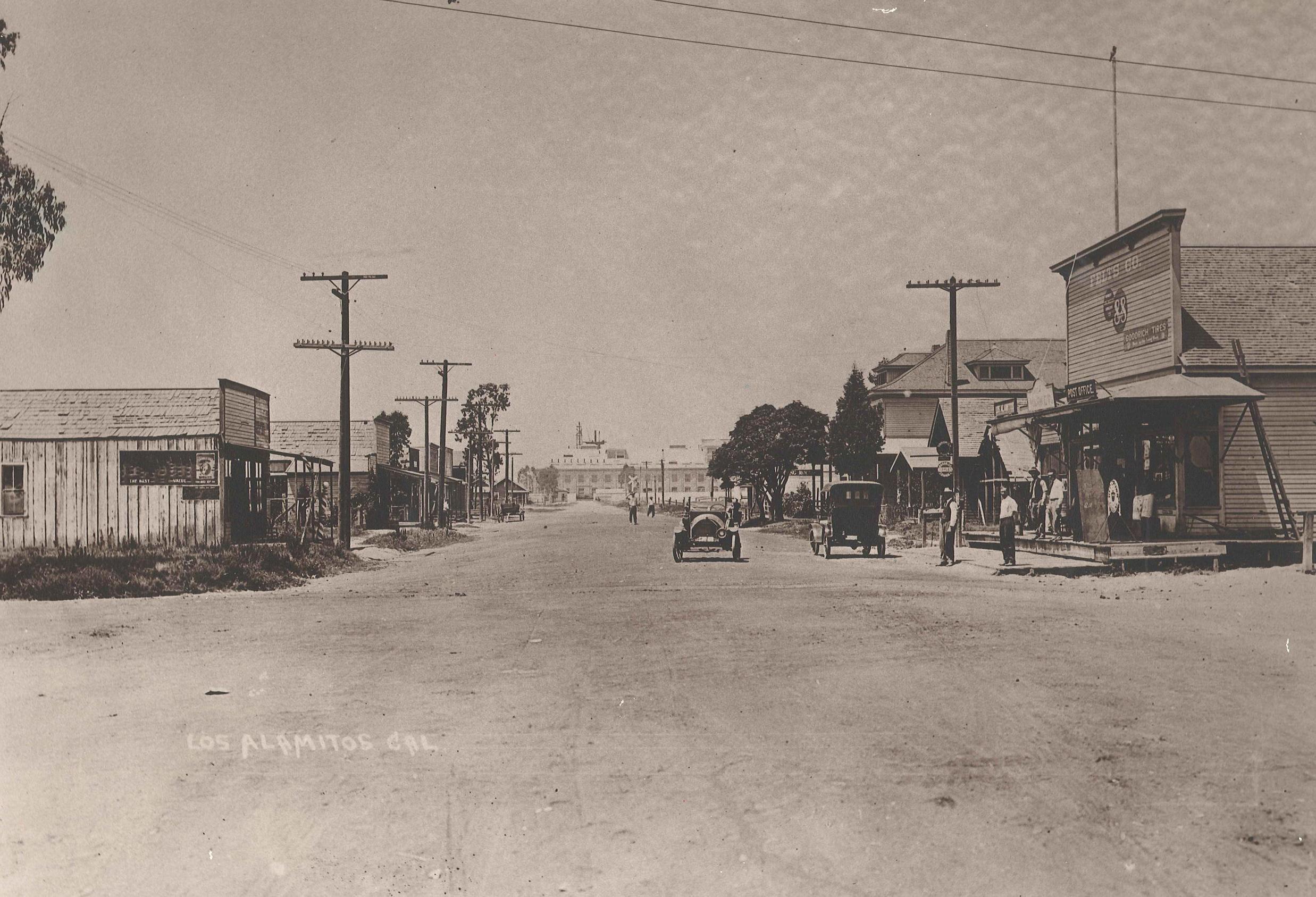 The township of Los Alamitos had already begun.  The first school was built in 1881 at what is now Katella Avenue and Los Alamitos Boulevard.  Although most of the workers in the fields were Mexican, many immigrants from Belgium, France, and Germany came here to work and establish their own farms and businesses. When nematodes (burrowing insects that fed on the roots of the plants) destroyed the sugar beet industry, the sugar refinery was closed down and eventually leased, in 1921, to a Dr. Ross, who used it to process wild horse meat into dog food. The 1929 depression, followed by damage caused by the 1933 earthquake, ruined this enterprise. Dr. Ross died a pauper, and eventually the mill was torn down.

While the sugar mill was prospering, Los Alamitos had become a throw-back to the typical wild west town. Reagan Street was the principal thoroughfare until Los Alamitos Boulevard was black topped in 1921-22. There were two hotels in town, and reportedly an average of two shootings or stabbings occurred every weekend. Katella was a country road that led to the entrance of a farm on the edge of Coyote Creek. It was named after the two daughters of the farmer, “Kate” and “Ella,” who, well into their eighties, were proudly present when “their” road was named and dedicated.

Following Pearl Harbor (December 7, 1941), the U. S. Navy moved its training field for aircraft from Terminal Island to Los Alamitos, where a 1,300 acre tract was commissioned. Here, Navy and Marine fliers were trained, as well as fliers from Australia, New Zealand, England, Free France, Poland and Norway. Its presence revitalized the sleepy country town of Los Alamitos, bringing new settlers and businesses to the area. When the war ended, the air base was used as a reserve training field for military fliers, being operated under control of the Navy. It was reactivated during the Korean and Viet Nam conflicts, after which the Navy turned it over to the California National Guard.  The Joint Forces Training Base now serves as a reserve training center for all branches of the military, as well as for its own personnel. 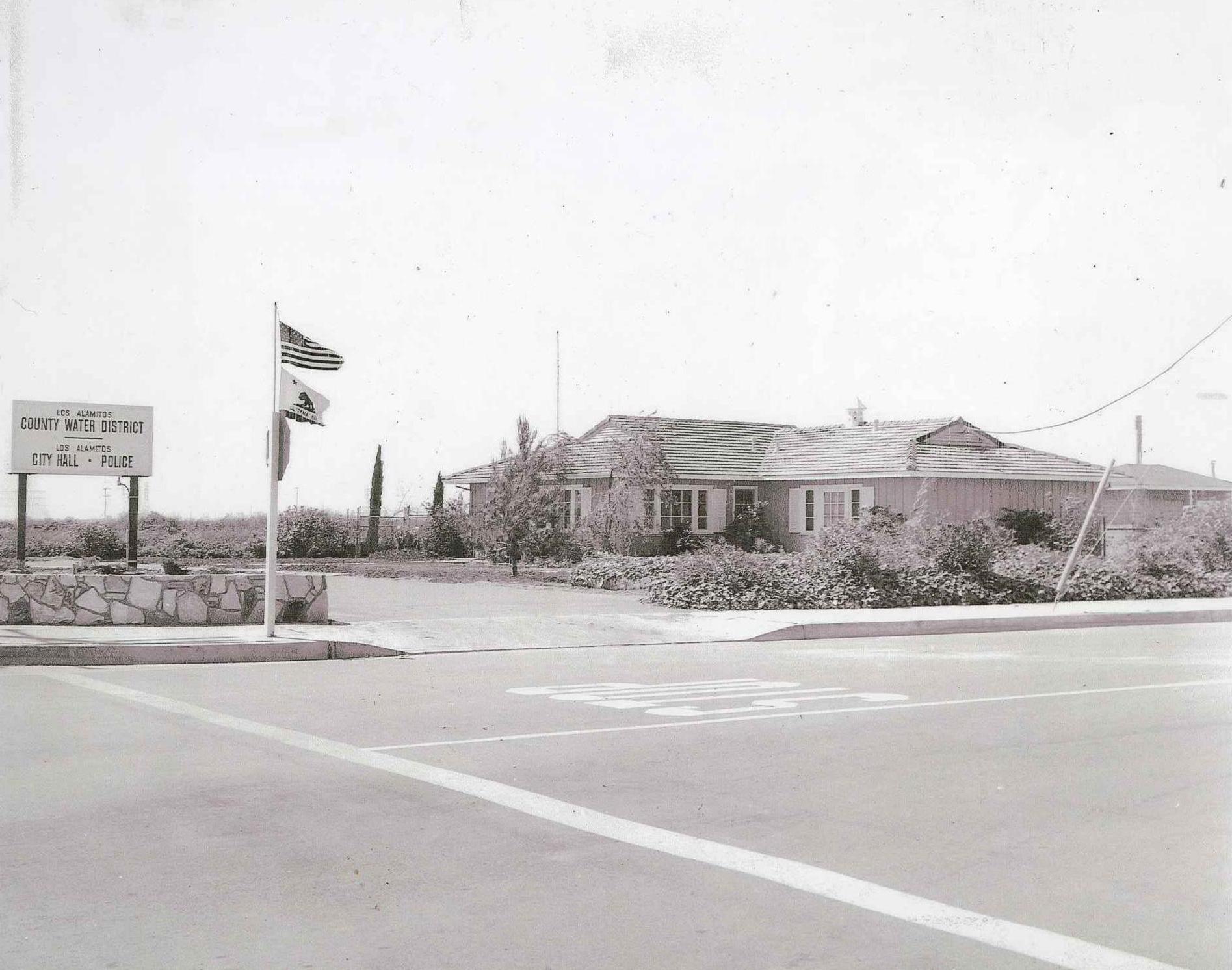 On March 1, 1960, the township of Los Alamitos became a chartered city.  The city of Little Cottonwoods was affectionately described as A Jewel of a City.  The City’s seal, designed by longtime resident William A. Daniels, captures the ancestry of the region.  The official flower, the Daisy, reflects the importance of our City’s youth since it was nominated by a young boy because it was his mother’s favorite flower.  Still embracing its small town ambience, the City offers excellent recreational and park facilities, a stellar police department, and an enthusiastic Chamber of Commerce.  With its outstanding schools, friendly neighborhoods and strategic location as the crossroads of two major freeways, Los Alamitos keeps its roots in history and its future vested in the those who cherish this special community.